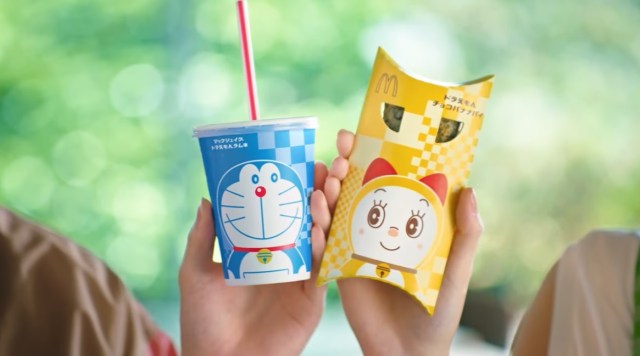 It’s like an anywhere door for those with a sweet tooth.

Earlier this summer McDonald’s Japan allied with Char Aznable, the charismatic fiendish antagonist of the Mobile Suit Gundam Franchise. Now that we’re getting in summer festival season In Japan, the chain is once again collaborating with an anime spokesperson, but this time they’ve chosen one that’s more comprehensively sane: Doraemon!

As Japan still grapples with the ongoing challenges of the pandemic, summer festivals have returned in some communities, but not all. Such is the theming of his new Doraemon desserts “Festival Candy Everywhere”, a pun on the robotic cat’s Anywhere Door gadget, which allows him to warp wherever he wants using the power of future technology.

▼ Two candy loving darlings are the stars of the commercial

The beginning is the Doraemon McShakewhich is blue not only to match Doraemon’s image color, but also because it’s the default hue for Ramune Flavor Sweets. Ramune started out as a fizzy soft drink with flavors reminiscent of apple and light citrus and remains a hit at summer festivals to this day. The Doraemon McShake takes that flavor and applies it to McDonald’s milkshakes for a combination of cool refreshment and creamy satisfaction.

▼ The Doraemon Shake is served in cups Doraemon character graphics.

The Doraemon Shake is accompanied by another take on a longtime festival favourite: the chocolate banana. In the orthodox style, these are chilled bananas covered in a layer of chocolate that McDonald’s uses as the inspiration for the Doraemon Choco Banana Cake.

A mixture of chocolate sauce and banana cream with pieces of fruit is in the crispy hand-held cake shell. The color palette is the same here Doramiso they, Shizuka or Suneo will grace the packaging.

Both the Doraemon shake and cake will be on sale for a limited time beginning August 5, with the shake costing 130 yen ($0.98) for a small and 200 for a medium, and the cake for 150 yen, making them not only a feast for your taste buds, but also a dessert option for any budget.