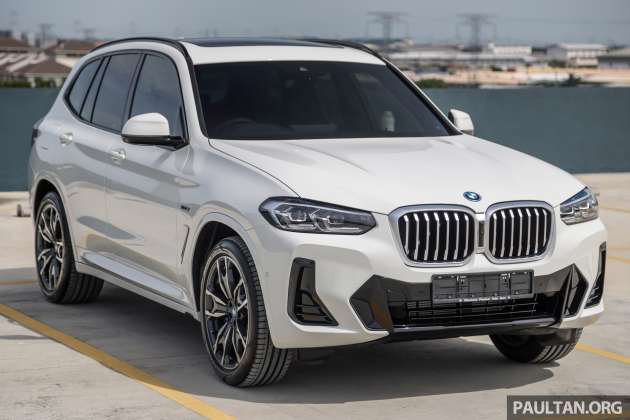 It’s been almost four months since the BMW X3 xDrive30e launched in Malaysia, but we’ve finally managed to get our hands on the plug-in hybrid SUV. As you’d expect, we’ve included a full photo gallery so you can go through all the details.

Let’s talk about pricing first. The xDrive30e is a little over RM8,000 cheaper than the petrol-powered xDrive30i and retails RM321.139 with the standard two-year unlimited mileage warranty – or RM339,989 with a five-year guarantee and service package. Both figures come with no insurance, including full Sales and Service Tax (SST) rebate, which is only available until the end of next month. If SST is included, the numbers jump up RM337,950 and RM356,800 respectively.

Between it and the ZF eight-speed automatic transmission sits a 50 kW (68 hp) electric motor, which contributes to a total system output of 252 hp and 420 Nm of torque. When accelerating hard with the XtraBoost function, peak electric power of 80 kW (109 hp) is available, allowing the xDrive30e to deliver up to 292 hp for up to ten seconds. In this mode, the car sprints from zero to 100 km/h in 6.1 seconds, two tenths of a second faster than the xDrive30i. By the way, both models have all-wheel drive. 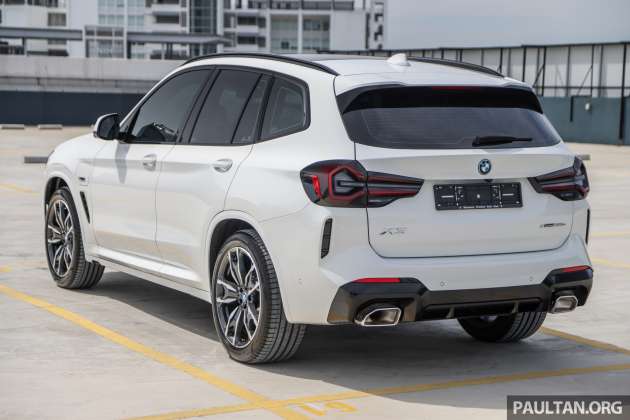 A 12 kWh lithium-ion battery mounted above the rear axle allows the xDrive30e to drive up to 50 km purely electrically in the WLTP cycle; it also contributes to a low (claimed) combined fuel consumption of between 2.0 and 2.6 liters per 100 km. Recharging the battery takes 3.6 hours on a 3.7 kW AC wallbox and about six hours on a three-pin household socket.

Aside from what’s under the hood, what sets the xDrive30e apart from the rest of the G01 X3 lineup? Actually not much. You get the same updated styling introduced in the facelift, including slimmer trapezoidal headlights (adaptive LED units with hexagonal daytime running lights are standard), a larger connected grille, and three-dimensional pincer-style taillights.

Aside from the obvious chargeport flap on the left front fender (now adorned with the “Electrified by i” badge), the xDrive30e’s unique aesthetic touches are limited blue rings around all BMW roundels. The latter extends into the interior, where the car also gets a brushed finish for the aluminum trim, rather than the darkened diamond pattern found on other X3s. The rest of the cabin is heavily revised, as with the petrol-powered variants, and features a similar angular design to the G20 3 Series. The M Sport additions here consist of a thicker M Sport steering wheel, sport seats, alloy pedals, black headliner and M-badged side skirt treadplates. You still get Vernasca leather upholstery and a Sensatec leatherette-wrapped dash.

Due to the position of the battery, the trunk of the xDrive30e is 450 liters, a full 100 liters smaller than the regular X3. The higher boot floor also creates a small lip (covered by a stainless steel panel), as well as a slight downward step further back when the rear seats are folded, so the cargo area isn’t completely level. Still, the maximum luggage capacity is an impressive 1,500 liters, so you won’t lose too much.

Technically, the xDrive30e inherits the improved infotainment system BMW Live Cockpit Professional from the xDrive30i with two 12.3-inch displays. The 16-speaker, 464-watt Harman Kardon surround sound system is also carried over, although the car gets at least a 360-degree camera system (other models have a basic rear camera) to offset the modest price drop. 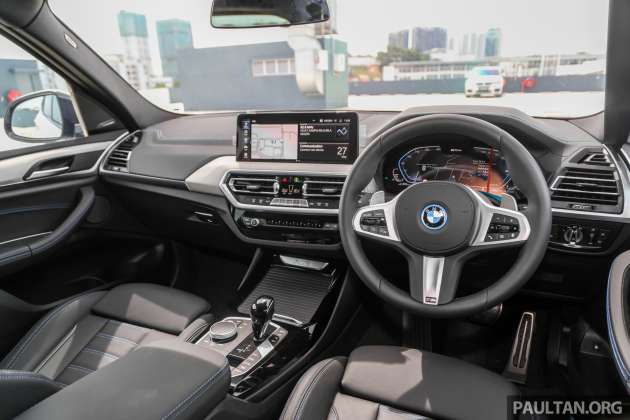 Otherwise, the equipment list is identical to that of the xDrive30i and includes passive dampers (no stiffer M Sport suspension on PHEV BMWs), keyless entry with proximity locking and unlocking, push-button start, tri-zone automatic climate control and power front seats with driver-side memory and adjustment of the upholstery width, a panoramic sunroof, passive cruise control, parking assistant and a touch-free electric tailgate.