This is an original 1959 David Bradley “Sport Kart” made just three years after the go-kart was first invented by Art Ingels of Los Angeles in 1956.

With the advent of the go-kart, Sears wasted no time selling their own version, designed and built by their wholly owned subsidiary, David Bradley, and they made it available for nationwide delivery through their catalog.

The arrival of the go-kart

The genius of Art Ingel’s go-kart design lay primarily in its simplicity. Anyone with basic welding skills could create one, and many of the parts needed could be sourced from machines that already existed – like lawn mowers, which often provided the engines. 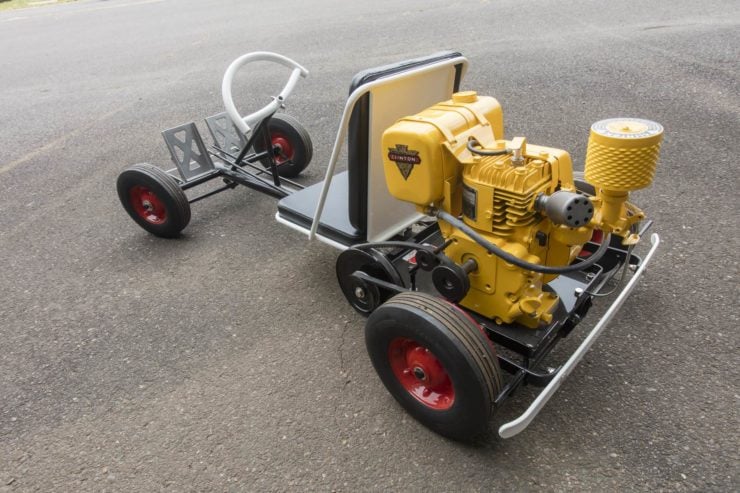 The kart is powered by an original Clinton engine from the 1950s. At the time, Clinton was one of the largest small engine manufacturers in the country.

The go-kart’s popularity increased like wildfire, first on the West Coast and then nationwide with the first official race being held in the Rose Bowl parking lot in Pasadena, California, featuring several dozen home-built go-karts of various shapes and forms sizes participate.

What keeps many people from getting into motorsport is the high costs that typically come with it. Go-karts suddenly removed this barrier due to their extremely low cost to own, race and maintain.

As a result, many generations of world champion racers began their careers in karting.

The David Bradley Sport Kart was one of the first mass-produced go-karts in the world. It was designed and built by the David Bradley Manufacturing Company, which had been acquired by Sears, Roebuck and Company in 1910. 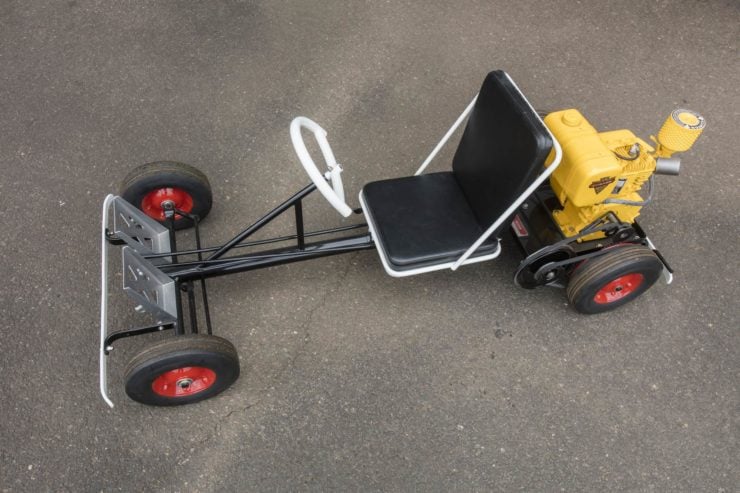 Unlike modern go-karts, this one has just a single tubular steel backbone connecting the front and rear ends.

After the purchase, the company’s gardening equipment, including the famous “Garden Riding Tractor”, was sold through the hugely popular Sears catalogue.

With the advent of the go-kart in the mid-1950’s, the Sears catalog wasted no time selling its own David Bradley-built version. It was about as simple as a go-kart could be, with just a single steel tube forming the backbone of the chassis.

At each corner are red steel wheels with solid rubber tires (not pneumatic) riding on solid axles. Simple bumpers are fitted front and rear, and the single-cylinder engine was sourced from Clinton – one of the largest industrial engine manufacturers in the country at the time.

A simple bolstered seat is fitted behind a semicircular steering wheel, chosen to give the driver room to put his legs underneath when he sits down. In front you will find two large pedals, one for driving and one for stopping. 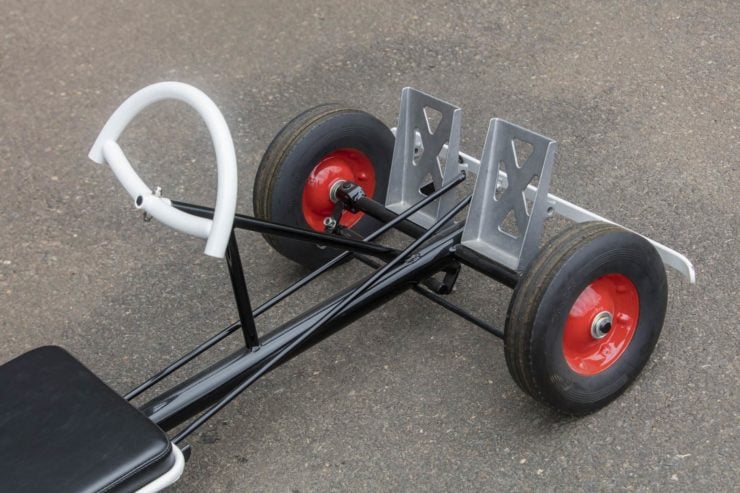 The driver’s feet sit in the large, almost airplane-like pedals, and the yoke steering wheel was chosen to ensure plenty of space underneath.

Exact sales of the David Bradley Sport Kart are unknown, although we see them being offered for sale in various states of preservation or restoration from time to time.

The David Bradley Sport Kart you see here benefits from an extensive restoration which appears to have returned it to mint condition throughout – right down to the engine and chassis identification plates.

As you’d expect, it’s powered by a single-cylinder Clinton engine that drives the rear axle via a belt-drive system. The seat, steering head, pedals and wheels all appear to be in excellent shape, and so does the chassis.

If you would like to read more about this unusual historic go kart you can visit the listing here on The Market by Bonhams. It will be auctioned in Newburg, Oregon with a target price of $1,000 to $1,500. 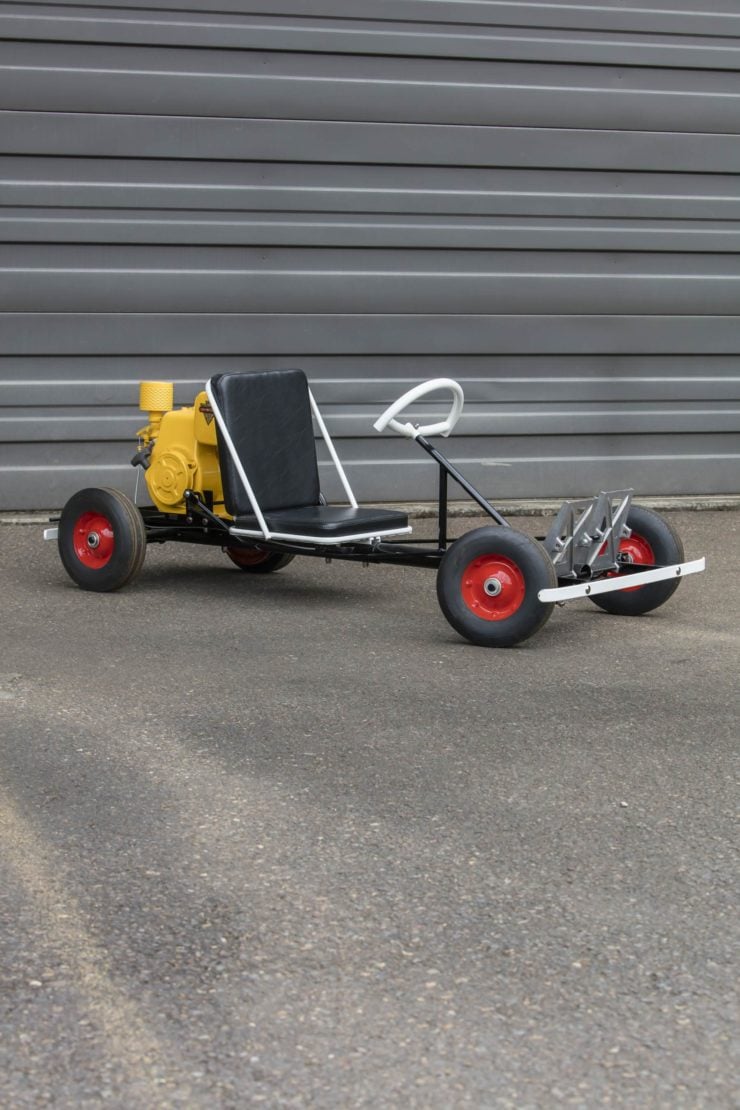 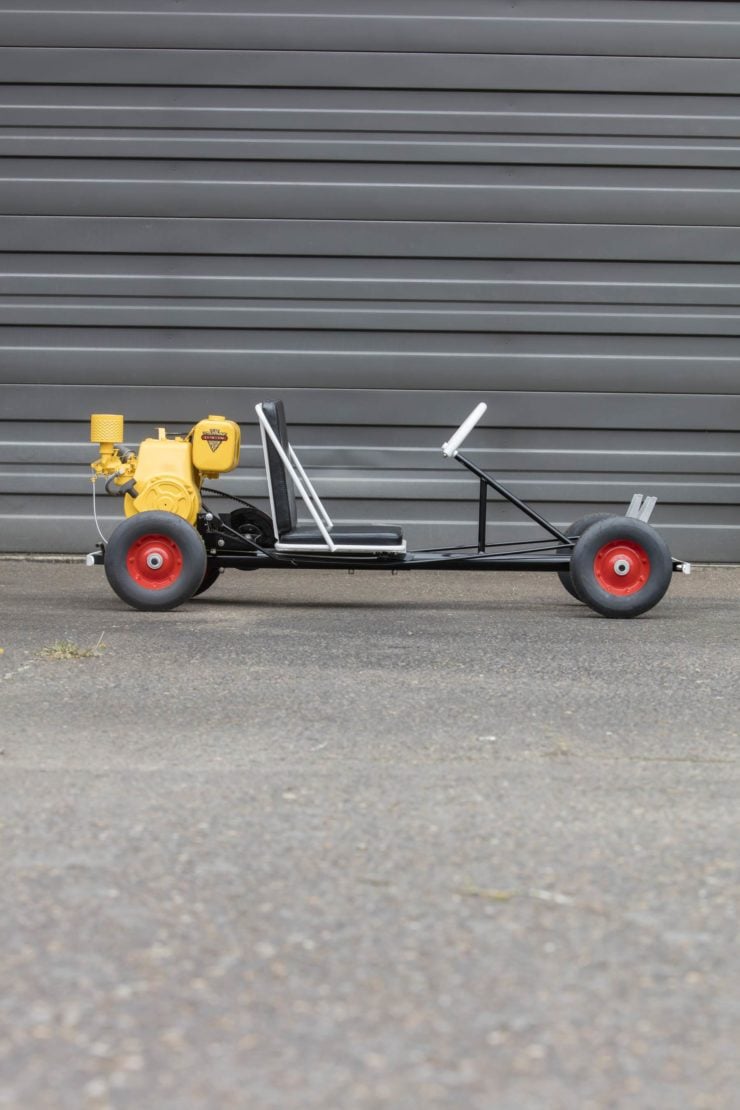 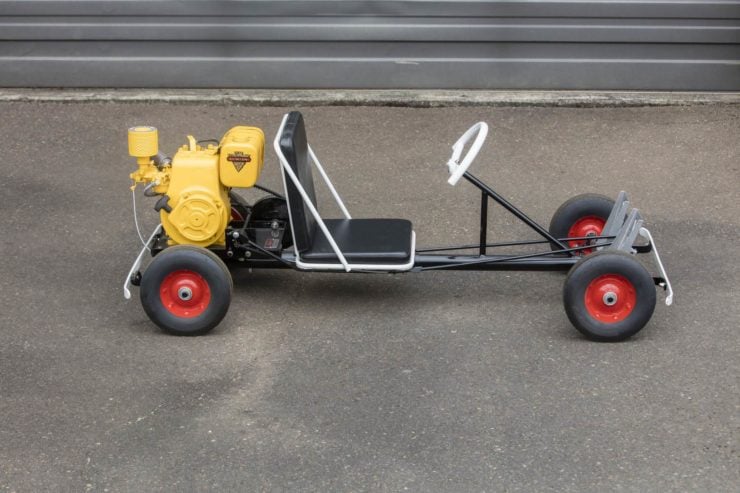 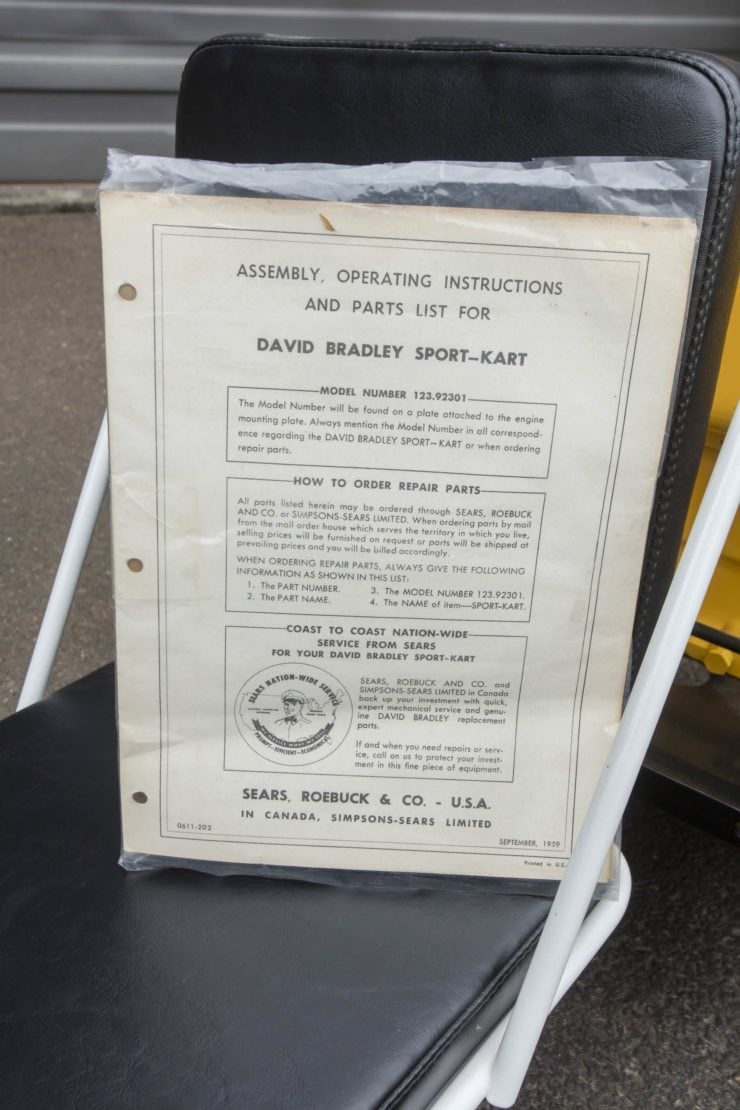 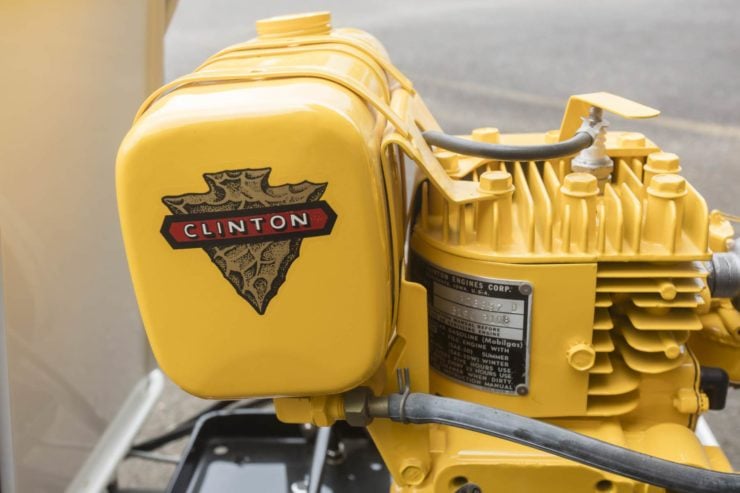 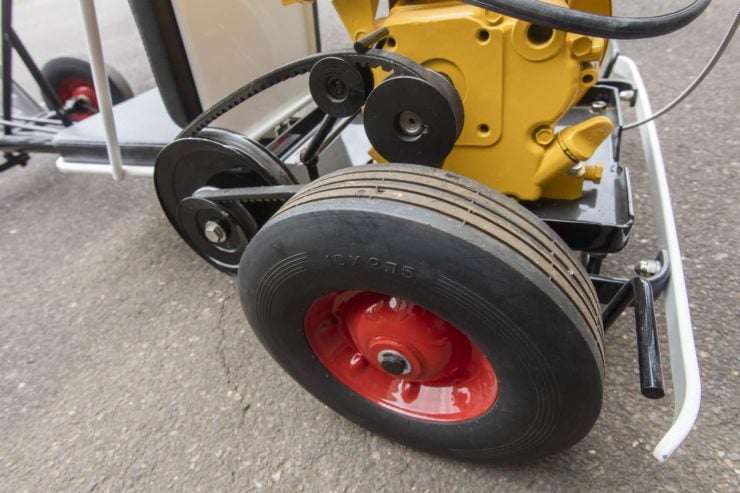 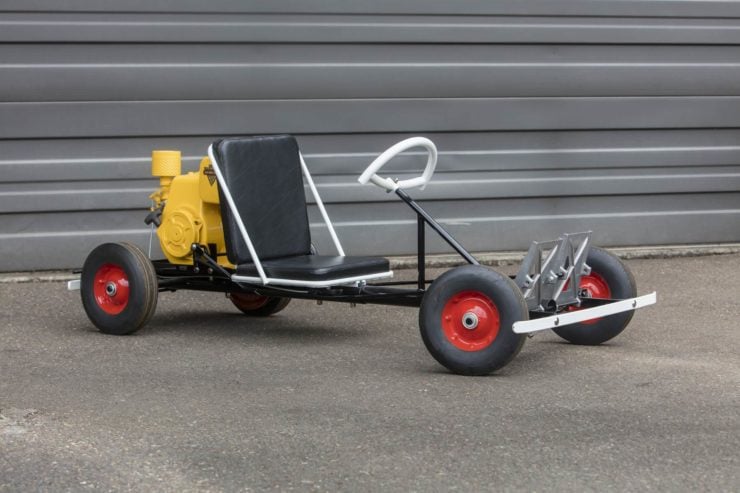 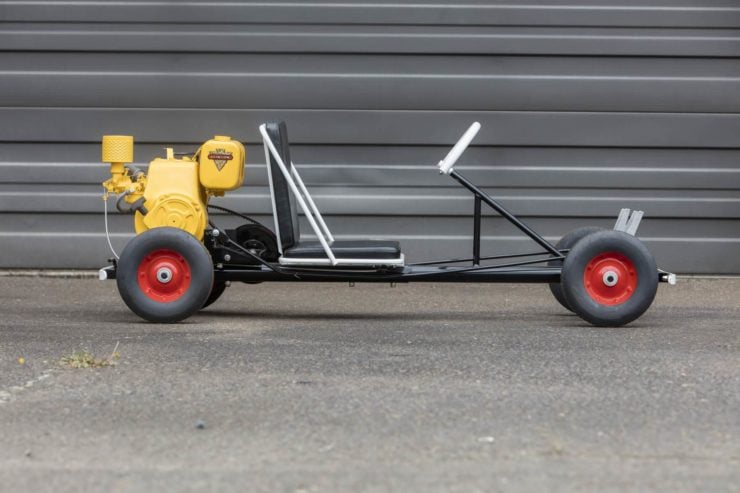 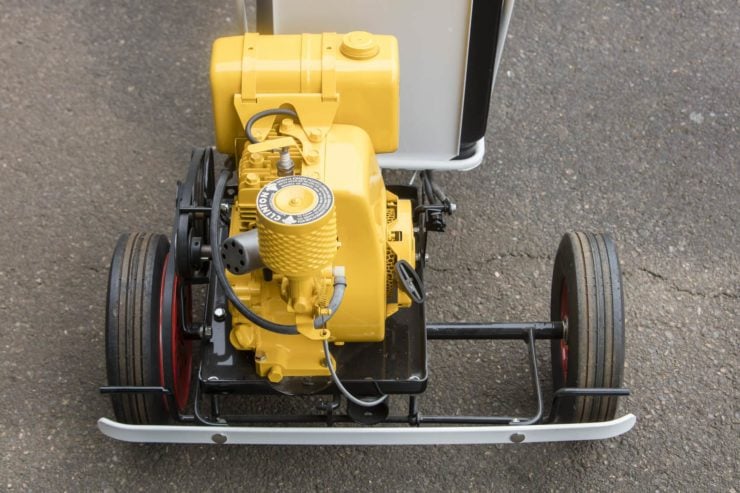 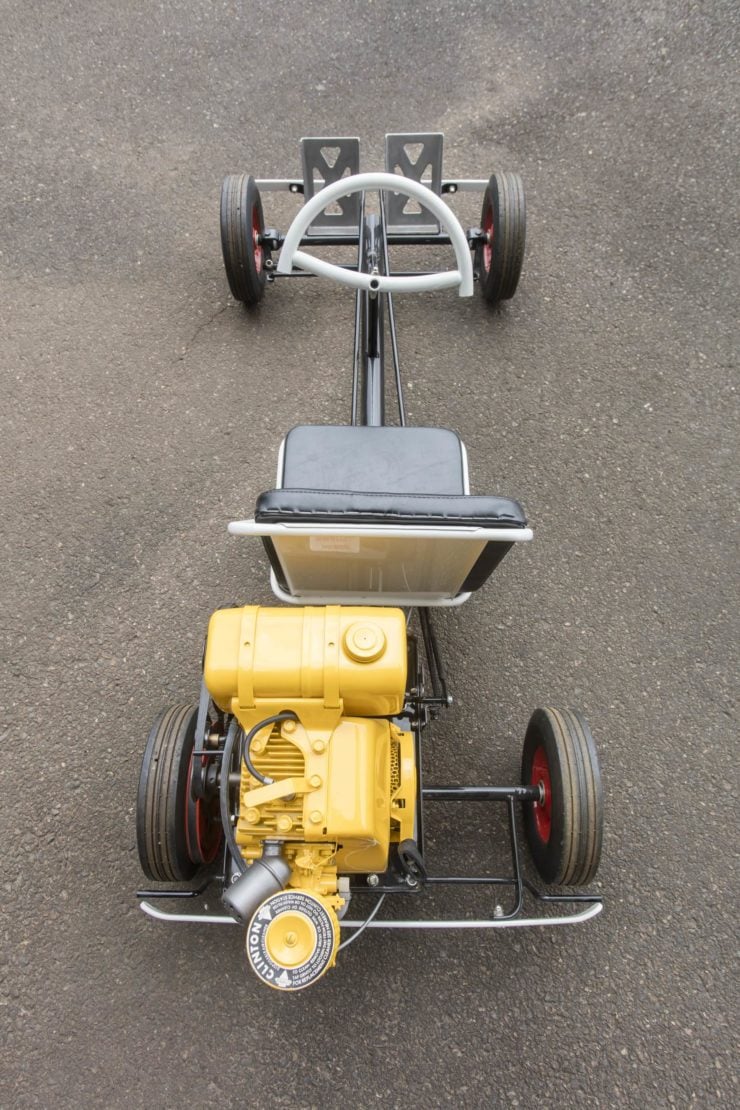 Images courtesy of The Market by Bonhams

Silodrome was founded by Ben in 2010 and over the years has grown into a global leader in the alternative and classic automotive sector, with millions of readers around the world and many hundreds of thousands of followers on social media.