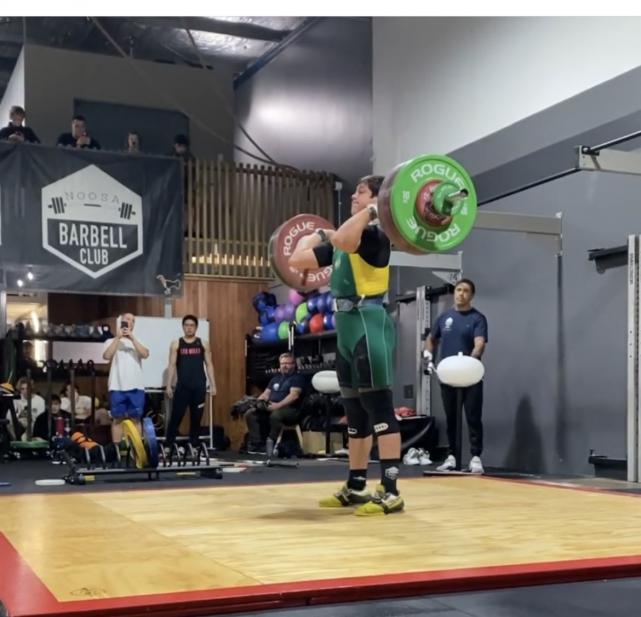 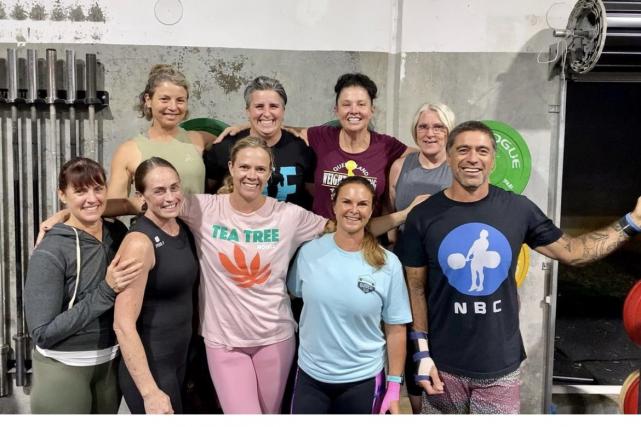 It will definitely be packed for the three members of the Noosa Barbell Weightlifting Club this weekend on June 4th and 5th as they travel to Brisbane for the u/15 Youth Nationals Weightlifting Titles. Representing the club are Kaiya Marsh Youth F64, Ethan Oberem Youth M73 and Jack Lafferty Youth M 81.

Indeed, May was not only very busy but also very successful for its members.

Competing in the Masters Division of the Queensland Championships, the eight-man team came home with eight medals, six gold, one silver and one bronze. This outstanding performance has resulted in all team members qualifying for the Nationals, which will be held in Melbourne in four months.

“Right now,” said head coach Woogie Marsh, “they’re taking a well-deserved short break, but then it’s back to the grindstone.”

The Noosa Barbell Masters are the heart of the club. They have put in tremendous effort, training and helping build the club’s community and culture over the past three months, which was evident on Sunday night when the club hosted its first international online event, the Youth and Junior Oceanic Championships.

Taj Marsh was selected in the M96kg Junior U20 Division. The session was very exciting as top two lifters Sepi Semai and Taj rode lift after lift, wowing teammates and supporters.

Taj snagged a personal best of 127kg to take out the ripping component.

Sepi then came out and just made the 155 to close the gap on Taj’s early lead at 4kg. Taj was next at 157kg and again made a big jump to 160kg. Taj was still tired and asked the trainer for more time, so he went up to 161kg to try to push Sepi back out. Sepi responded again with another big jump to 165, forcing Taj back onto the platform.

Taj cleaned the weight and made a valiant attempt to jerk off 161kg for a massive PR but unfortunately missed the forward pull. Sepi then returned to the platform for 350 lbs and missed the clean, earning Taj the gold medal and Oceanic Champion title.

The next major for Taj will be the U23 state titles in Townsville in six weeks.

The amazing two weekends of competition that have just passed have been a great experience for the club indeed: and as mentioned, the U15 Youth and National Championships are taking place in Brisbane this weekend.

It’s that time of year once again when athletes wearing football boots command a lot of attention. However, there are other clubs and athletes who are not just doing another sport, but are actually great performers and thereby bring pride to our community.

One of those racquets is without a doubt the Noosa Barbell/CrossFit 4566 racquet. All eight members of the Masters team have qualified for the national titles to be played in Melbourne in four months’ time and this weekend three members, as mentioned above, will be playing the U/15 and Youth Nationals in Brisbane.

The Masters team for Melbourne and their state title medals are there as successors. Gold: Wendy Campbell, Maryanne Long, Charleen Whitton, Erin Oberem, Jo Phillips and Leanne Crooks. Silver Mel Lumb and Bronze Dianna Worrell. We wish all team members and their coaches all the best.

Our team Cooroy Team Impact Boxing last weekend was also very successful. The three fighters traveled to a tournament in Accacia Ridge, Brisbane that would be the first step in selection for the Australian team to compete in the upcoming World Championships and came home with two gold medals and one silver medal. The gold was won by Paige Robinson, Slade Gray and the silver Carson Lawrence.

A report from head trainer Mark Evans tells us about the three days of boxing.

“We are very happy with the results. All three of our squad made the country team for Melbourne. They usually just take the winners, but Carson, who lost by split decision, and a stellar win in Saturday night’s semifinals earned him a spot on the team.

“The Melbourne tournament, which takes place from July 6th to 9th, gives us the time to ensure that all team members are up to date with their fitness,” he said.

Two things came out of the exams.

One was that Boxing Queensland is starting to rebuild after a major slump caused by the Covid outbreak and the other was that Impacts boxer Paige Robinson is definitely a girl to keep an eye on.

A chat with Pirates head coach Brett Winkler brings us up to speed on the upcoming games after last week’s games were a wash.

“The lads are keen to get back into the fifth-round catch-up games planned for this week to catch up on the games that were washed out three weeks ago.

“The Division 1 team, now sitting second on the ladder, will set sail south to Nambour, with the main game starting at 6pm,” he said.

“Following our last game win in the heavy rain against the incumbent premier and then competition leader Kawana, the Pirates will be aiming for three wins in the trot. The Noosa Division 2A, U/18 and Open Women teams will take to the streets at Crusher Park starting at 1:30pm for some good football action. The Division 2B team will travel to Cooran at 2:30 p.m. to play Yandina.”

Let’s all hope for a dry and sunny weekend.