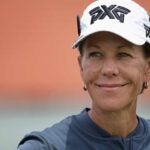 In March, Suzy Whaley announced that she would take over as President of Golf Nation, an entertainment and e-commerce platform.

If you’ve set foot on a golf course in the last two years, you’ve probably noticed the obvious: the game is booming. That includes women, but the dynamic is in a different area: leadership roles. As you’ll see in this pack – in which we’ll feature eight women in the game – many prestigious jobs in sport are now held by women. From national-level appearances to behind-the-scenes excellence at the biggest golf equipment companies, women are making their mark in fields traditionally dominated by men. At GOLF, we celebrate the essential role these women play in making the game better and more inclusive for all of us.

When it comes to pioneering women in golf, it’s hard to find a woman with more firsts than Suzy Whaley. In 2003, she became the first woman in 58 years to qualify for a PGA Tour event. She was the first woman to ever serve as an officer in the PGA of America, and in 2018 Whaley was elected president of the organization, making her again the first woman to hold the office.

In March, Whaley announced that she will serve as President of Golf Nation, an entertainment and e-commerce platform for golf enthusiasts that will showcase the game through a variety of shows, available on mobile, desktop, Apple TV, Hulu and Roku are available.

“I couldn’t be more excited,” she says. “We will present golf in such a way that everyone is invited to play.”

Whaley will have her own content channel on the platform while keeping her day job as an instructor for the Country Club at Mirasol in Palm Beach Gardens, Florida.

how does she do it all “Priorities,” she says. “A long time ago, I decided not to hold myself to this unattainable standard of getting everything done every day. Now I just try to stay fully present in everything I do.”

As a four-year-old member of Columbia’s first class of female collegiate golfers, Jessica can outperform anyone on the pole top. She can also overtake them in the office, where she is primarily responsible for producing print and online features and overseeing large special projects such as the first style issue of GOLF, which was released in February 2018. Her original interview series, A Round With, debuted in November 2015 and has appeared in both magazine and video form on GOLF.com.