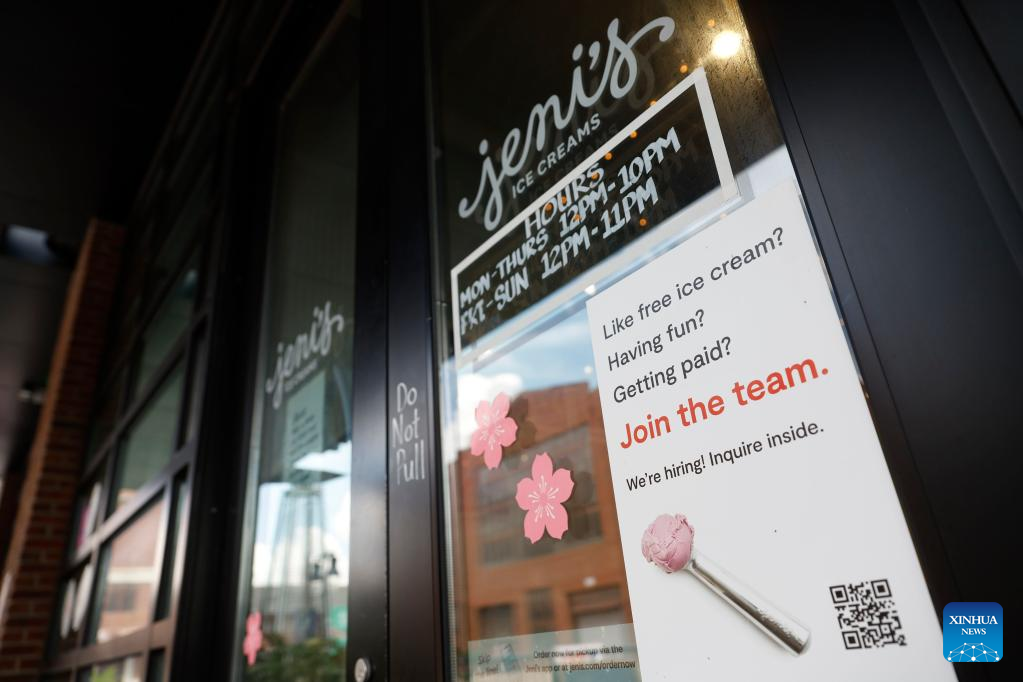 Photo taken on August 5, 2022 shows a hiring sign on the door of a store in Washington, DC, the United States. U.S. employers added 528,000 jobs in July despite recession fears, with the unemployment rate falling to pre-pandemic levels of 3.5 percent, the U.S. Labor Department reported on Friday. (Photo by Ting Shen/Xinhua)

WASHINGTON, Aug. 5 (Xinhua). A surprisingly resilient jobs report questions whether the United States is in a recession amid some economists’ gloomy forecasts of a slowdown.

U.S. employers added a whopping 528,000 jobs in July, according to Friday’s Labor Department report, which showed the job market has now regained all 22 million jobs lost due to COVID-19-related restrictions on businesses as of 2020.

Economists had predicted the economy would create 250,000 jobs – less than half of what Friday’s report revealed.

The number was a victory for US President Joe Biden, who has been plagued by record-low poll numbers and rising inflation.

“Today, the unemployment rate hits its lowest level in more than 50 years: 3.5 percent,” Biden said in a statement Friday morning. “More people are working than at any time in American history.”

The situation is unusual as it comes amid rising inflation, shrinking gross domestic product (GDP), record low consumer confidence and a slowing economy.

The US economy shrank at an annual rate of 0.9 percent in the second quarter after a 1.6 percent contraction in the previous quarter, the US Commerce Department reported last week in a “preliminary” estimate. That meets the technical definition of a recession.

But people are still spending and traveling, and Friday’s solid jobs report is the latest evidence supporting some economists’ argument that the economy is not yet in recession.

Economists are divided over the direction of the economy.

“The economy is clearly very strong and wages are rising fast. This is in contrast to the shrinking GDP. I expect upward revisions,” Dean Baker, senior economist at the Center for Economic and Policy Research, told Xinhua.

But others remain cautious.

The report is “good for jobs, but not for the FRB,” Bosworth said, referring to the Federal Reserve Board.

“It should raise expectations of further rate hikes,” Bosworth said.

House and Pugliese echoed his view, noting that job growth of more than half a million jobs a month and a falling unemployment rate will give the Fed the confidence to “aggressively pursue its fight against inflation.”

“At least a 50 basis point rate hike at the FOMC (Federal Open Market Committee) meeting of September 20-21 seems likely at this point,” they said, adding that another 75 basis point hike “could be imminent.” “. Inflation in the next two CPI reports shows no sign of a downtrend.

Markets fell in Friday’s monthly jobs report at opener before breaking even at the end of the day.

The Dow Jones Industrial Average fell before recouping losses late in the day. The Nasdaq was down a moderate 0.50 percent by the close on Friday.

Investors fear a booming employment sector could further boost inflation, which is at a 40-year high. This, in turn, could prompt the Fed to raise interest rates further, which could slow the economy and hurt the job market.

Even Fed Chair Jerome Powell said recently that the process to bring inflation down would likely involve a period of below-trend economic growth and “some softening in labor market conditions.”

However, the jobs report is a silver lining in Democrats’ dark cloud, as Biden’s approval rating is near record lows of 39.5 percent, according to the RealClearPolitics poll average.

Inflation is showing signs of easing. Despite a strong employment sector, millions of Americans are still feeling the pain of record food and gasoline prices.

All of this could lead to a wave of Republicans in the midterm elections in November, many experts say.

Darrell West, senior fellow at the Brookings Institution, told Xinhua the jobs report “suggests the economy could be stronger than widely believed, which would help Democrats significantly in November if this good news continues.”

“There’s a strong connection between the economy and the vote, the stronger the economy, the better Democrats will do,” West said.

Christopher Galdieri, an assistant professor at Saint Anselm College, told Xinhua, “More jobs and lower unemployment is always good news for presidents. The question this year is whether that will be enough to offset the high inflation in the minds of voters.”

“President Biden has had a string of legislative victories lately… but that hasn’t done much to increase his approval ratings. Democrats will likely hope that voters will see this as a reason to keep them in power,” Galdieri said. ■ 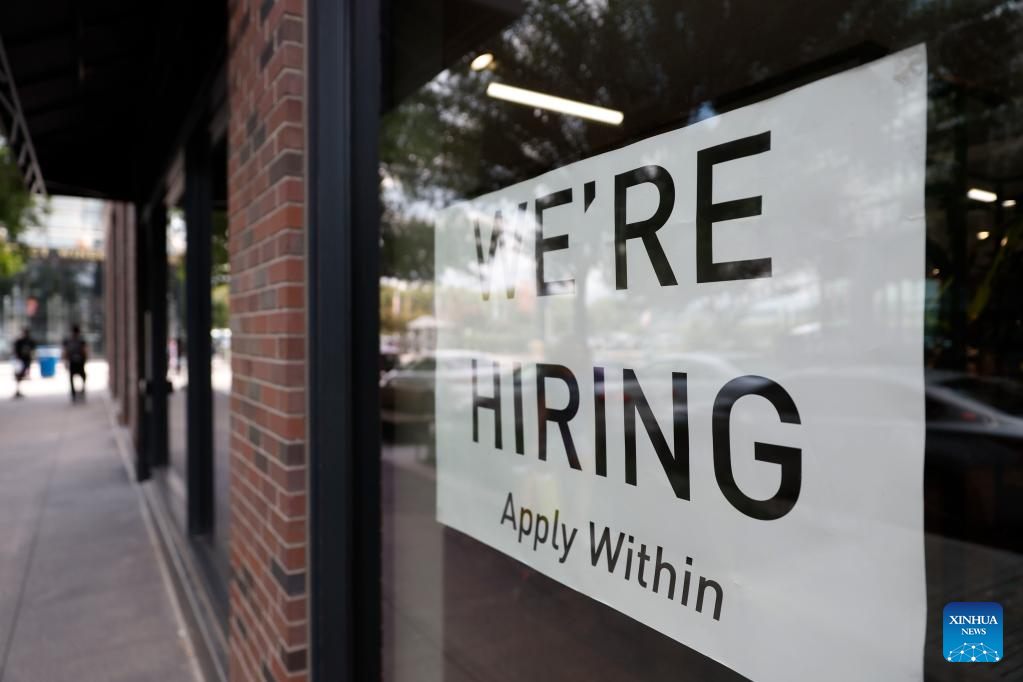 Photo taken on August 5, 2022 shows a recruitment sign on the window of a retail store in Washington, DC, the United States. U.S. employers added 528,000 jobs in July despite recession fears, with the unemployment rate falling to pre-pandemic levels of 3.5 percent, the U.S. Labor Department reported on Friday. (Photo by Ting Shen/Xinhua) 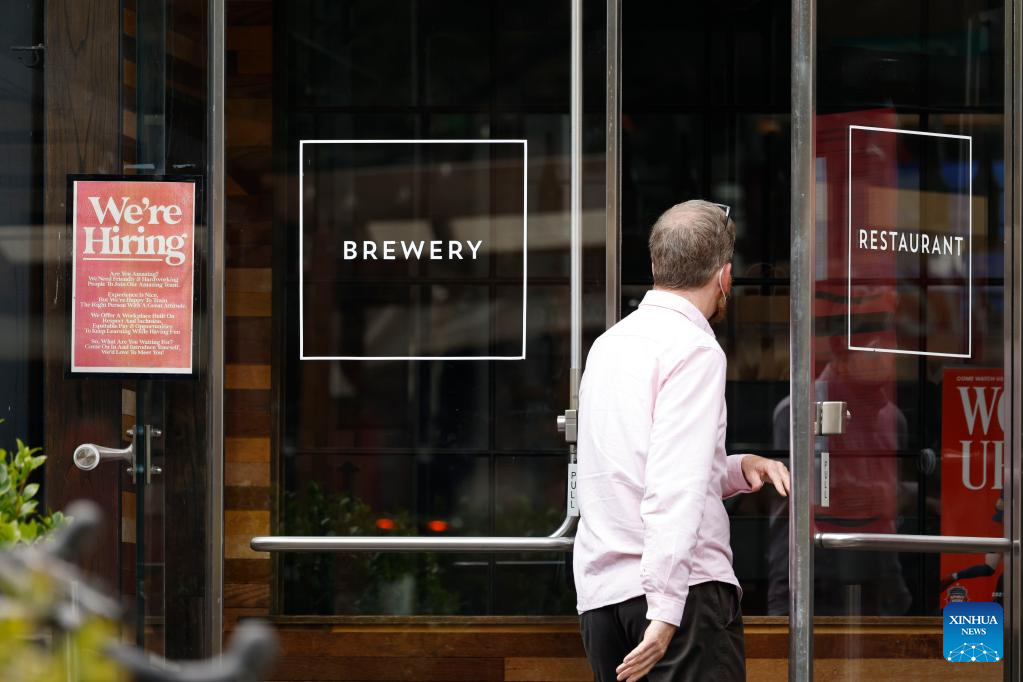 A man enters a restaurant with a recruitment sign posted at the entrance in Washington, DC, United States, on August 5, 2022. U.S. employers added 528,000 jobs in July despite recession fears, with the unemployment rate returning to pre-pandemic levels of 3.5 percent, the U.S. Labor Department reported on Friday. (Photo by Ting Shen/Xinhua) 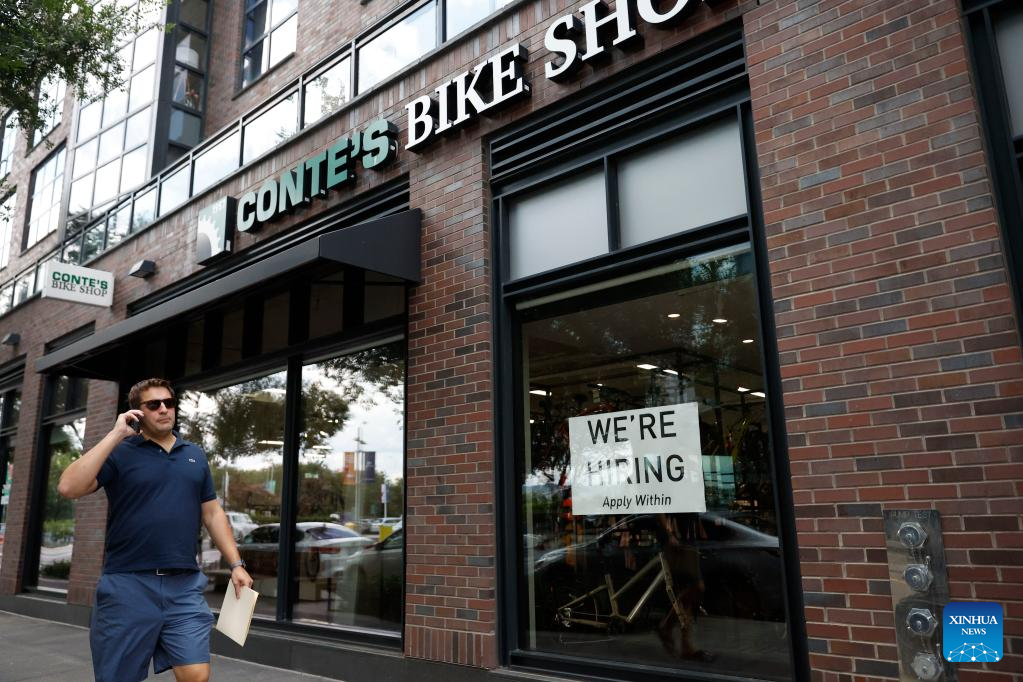 A man walks past a retail store with a recruitment sign posted on a window on August 5, 2022 in Washington, DC, United States. U.S. employers added 528,000 jobs in July despite recession fears, with the unemployment rate falling to pre-pandemic levels of 3.5 percent, the U.S. Labor Department reported on Friday. (Photo by Ting Shen/Xinhua)